Posted on February 22, 2013 by ParsCo Construction
ParsCo is often asked why they use pre-engineered truss systems on projects.  ParsCo prefers a pre-engineered wooden truss system because of the many advantages this system offers over other types of structural framing. Because they are precisely engineered, wooden trusses are capable of spanning greater distances than traditional joist framing. This results in more design flexibility and fewer intermediate supports, such as columns. The open triangle structure of a wooden truss also makes it easy for installers to fit mechanical and electrical components within the floor or roof framing. When a ParsCo project manager works on your project they focus on utilizing these features in maximizing the design and creating flexibility to provide Owners with options ordinary contractors may not offer.

Trusses are engineered to specific sizes. This means that every truss will have exactly the same dimensions, making it easy for installers to fit the trusses to the surrounding structure. This results in greater quality in construction.
Another benefit is that there are fewer surprises during construction, and the job can be completed much faster. This is particularly advantageous during roof construction. A wooden truss system allows roofers to get the building closed in quickly, which keeps building materials and workers protected from rain and other weather conditions. It accelerates the dry-in process thus helping your project move faster towards completion.
Many builders who use wooden truss systems choose to leave the trusses exposed. This allows the truss to become part of the building’s aesthetic design, and is widely used in buildings with a rustic or traditional style. A wooden truss can be built to almost any shape and design to fit any architectural plan. They can have a low-profile design for flat roofs and floors, or a gabled style for sloped roofs. Trusses can even be designed to create a cathedral or arch-shaped roof. Exposed rafter tails is another feature that has become increasingly popular here along the Gulf Coast.
One of the most widely recognized advantages of a wooden truss is the reduced cost of this type of framing. Because of their precise engineering, trusses require less material than joists constructed on site. This leads to lighter loads for wall framing and foundation systems, which can cut costs and help speed up the project. The trusses can be installed much more quickly than wooden joists, and require less skilled labor, resulting in significant labor cost reductions.
Trusses arrive on a flat bed truck as shown below. This photo was taken today on a new ParsCo project that involves Pre-engineered trusses. 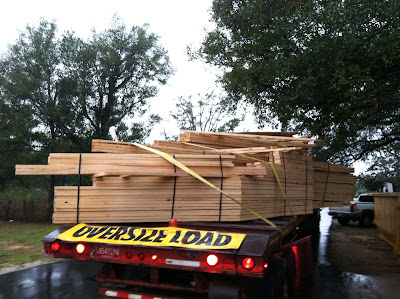 So in summary here are some of the benefits of using Pre-engineered trusses are:
1. They are generally a lot less expensive than on site framing.
2. You can have interesting features, like cathedral ceilings, at a low cost.
3. Since all the weight of the roof is transferred to the exterior walls, none of the interior stud walls are load bearing. This facilitates room design and allows for larger ceiling spans. It also facilitates remodeling, if necessary, later on.
4. Any skilled carpenter can set roof trusses in a short period of time saving on framing labor.
5.  They can be installed quickly which increases productivity and improves the project schedule. 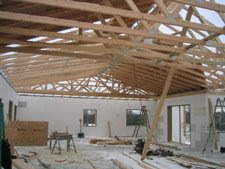 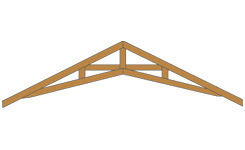 Scissors truss photo example above.
ParsCo’s new home designs have been trending with Owner’s requests for large “open areas and high ceilings” that either require a truss system (roof and/or floor) OR, an engineered framing system that uses some or all of the following: steel beams, large wood beams, posts, heavier joists & rafters, or supporting walls. 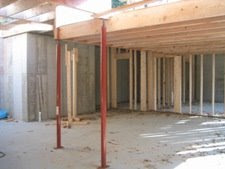 Posts and beams can be replaced with flat trusses as shown above on a previously built ParsCo project. 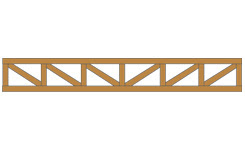