Posted on September 11, 2013 by ParsCo Construction 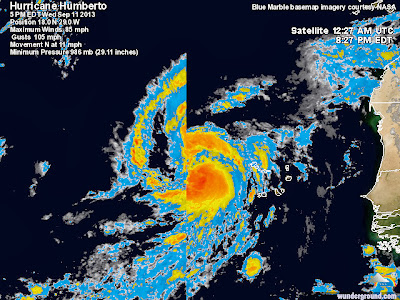 The Atlantic’s first hurricane of 2013 finally arrived this Wednesday morning, as Hurricane Humbertointensified into a minimum-strength Category 1 hurricane in the far Eastern Atlantic. Humberto is listed in NHC’s preliminary Best-Track data repositoryas having achieved hurricane strength at 8 am EDT on September 11, which would tie it with Hurricane Gustav of 2002 for the latest appearance of the season’s first hurricane, since 1941. Humberto is also Earth’s first tropical cyclone to reach Category 1 strength in three weeks–the last was Typhoon Trami, which hit China on August 21 as a Category 1 storm with 85 mph winds. To go three weeks during late August and early September without a Category 1 or stronger tropical cyclone is a very unusual event. Satellite loopsshow that Humberto is a small but well-organized hurricane with a prominent eye, located just west of the Cape Verde Islands. Humberto has until Thursday night to continue the intensification process.
Parsco Construction offers disaster services in Florida and the entire Gulf Coast region. Contact us at 850-696-7656 or email us at info@parscoconstruction.com.
http://www.pars-co.net
Construction Management